(The first part of this post is cross-posted from another blog of mine). As well as re-reading Atlas Shrugged for the next session of my Reading Group, I’ve also assigned The Fountainhead to a returnee student whose English is fluent. I’ve been creating worksheets for him, and will be posting them online, possibly here.

According to this press release on the website of the Ayn Rand Center for Individual Rights, sales of Rand’s blockbuster Atlas Shrugged have greatly increased this year and last year:

This short blog entry Ayn Rand and the Tea Party Protests gives 3 reasons why so many people are buying and reading Atlas Shrugged:

Stephen Moore identified one reason in his Wall Street Journal column, “Atlas Shrugged: From Fiction to Fact in 52 Years.” Atlas Shrugged depicted a future in which America descends into economic chaos due to ever-increasing government regulations. Each new problem spawns new government controls that merely deepen the crisis. The result is a downward spiral that nearly destroys America. Many Americans are finding Rand’s predictions uncomfortably close to real-life events.

Another reason for Rand’s appeal is her emphasis on the moral dimension. One of her themes was that no country can survive when its government constantly punishes good men for their virtues and rewards bad men for their vices. Americans correctly recognize that it is unjust for the government to take money from those who have lived frugally to bail out those who have lived beyond their means. Honest men should not be forced to pay for the irresponsibility of others.

Finally, Atlas Shrugged resonates with many Americans because they recognize that our current crisis is not just about bailouts and budget deficits. It’s also about a more fundamental issue — the proper scope of government.

Yaron Brook, Director of the Ayn Rand Center, writes on the Fox News website about a fundamental point of Atlas Shrugged:

“Atlas Shrugged” argues that ideas shape society. A society that values reason, the individual, and freedom creates the United States of America. A society that denounces the mind, preaches self-sacrifice, and worships the collective creates Nazi Germany. What “Atlas” shows is how our culture’s ideas–particularly its ideas about morality–are 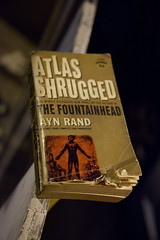 moving us step by step away from the Founding Fathers’ ideal.

There are, of course, critical articles, ranging from the dismissive, to the abusive, to the weakly reasoned. The dismissive can be dismissed, as the author himself admits he’s never actually read any Ayn Rand:

According to my friend and former colleague Scott Galupo in the Washington Times, sales of the book had tripled through April as compared to the same time period last year. I can’t say that I’ve ever read Rand, and Scott’s assessment of the book doesn’t increase my interest

Showing great trust in Scott Galupo, a man whom he dismisses as being usually wrong, Robert Schlesinger assures his readers that the Galupo piece is worth reading, tho the excerpts he quotes suggest that the main reason Schlesinger thinks it is worth reading is because it reinforces his own preconceptions (and obviates the need to actually read the book). Galupo’s main reason for dismissing Atlas Shrugged is that he thinks it is escapist fantasy. Galupo states

that American conservatism has shown great adaptability in the face of 200 years of federal governmental expansion, but that it nonetheless still suffers fringe-nuttery, as evidenced by the Rand/Atlas resurgence.

Murray Rothbard, himself no fan of Ayn Rand and her coterie (he was a member for a while, though he seems to have always admired her novels), would have some critical (at the same time as intelligent and informative) things to say about this “great adaptability” of conservatism.

The message of that turgid 1200-page opus, that money is the root of all good, has inspired those who need justification for extreme selfishness and for looking down at the rest of humanity as “looters” and “moochers.”

The novel has certainly inspired a large number of people, including (famously) Angelina Jolie and Alan Greenspan (and we can add Murray Rothbard whose admiration for Rand’s novels did not prevent him from seeing through the phoniness of  Rand and her admirers); I’m sure all of them were merely looking for justification for extreme selfishness. Nowhere is it explicitly stated that “money is the root of all good”, but at least one character, Francisco D’Anconia, challenges guests at a party with the following question: “You say that money is the root of all evil. Have you considered what is the root of money?” The dollar sign is admittedly used in the novel as a symbol of the vision of capitalism that Rand ascribes to the Founding Fathers (or some of them, at least).

I look to Atlas Shrugged more for conveniently totable beach reading than an economic blueprint.  What’s interesting to me, though, is how many details Rand did get right–like the markets in “unfreezing” Ukrainian bank deposits, so similar to the frozen railroad bonds of Atlas Shrugged.  Or the cascading and unanticipated failures, with government officials racing to slap another fix on to fix the last failing solution.

McArdle then attempts to explain Rand’s accurate description of socialism at work:

She was able to describe these things so well, of course, because she’d seen what an economy looked like while it was being wrecked.  All of Rand’s writing is dominated by the fact that she lived through the birth pangs of Soviet Russia, and saw her family’s business destroyed by Lenin’s ideology, and extraordinarily incompetent economic management.

While the biographical background is true, it is dangerous to assume that Rand was merely describing what she had lived through, and that that explains the realism of her descriptions. What evidence is there that Rand’s writing is dominated by the fact that she lived throught the birth pangs of Soviet Russia? Rand herself rarely mentioned it or her family background. What dominates Rand’s writing is its powerful chanpioning of laissez-faire capitalism and individualism and its finely argued excoriation of socialism of any kind. Rather than her childhood experience, I would locate the explanation elsewhere. Rand dug deep into ideas to find the root principle or value at their base. Barbara Branden wrote about Rand’s adopting, at the tender age of 12 or 13

a method that she called thinking in principles… she meant the process of systematically and explicitly identifying the reasons behind each idea she held and the relation of each idea to all the rest… Later, in her novels and nonfiction lectures and essays, the meaning of thinking in principles came to focus on the “why”, by looking for the abstraction that united and explained two or more concretes (Branden, B., The Passion of Ayn Rand, New York: Doubleday, 1986, 22).

This can be confirmed by reading almost anything Rand wrote, either fiction or non-fiction (e.g. Philosophy – who needs it?). It is more likely, therefore, that Rand’s accuracy in “predicting” some of today’s events comes from her understanding of the ideas, the principles, that underpin the decisions, statements and actions taken today in the financial crisis. Rand was not of course the only one to understand the core principles and basic philosophy behind socialism, nor was she the only one to “predict” the present financial crisis, and many of those others who did predict it did not have the benefit of Rand’s childhood experience to guide them.

I recommend the following digital products: WP GDPR Fix, a WordPress plugin that quickly and easily helps you make your WP blog GDPR compliant. Brett Kelly's "Evernote Essentials", Dan Gold's $5 guides to Getting Everything Done with Evernote and Springpad, and DocumentSnap Solutions' Paperless Document Organization Guides. Be sure to try DocumentSnap's free email course on going paperless first before buying his products. Sign up for it on his homepage.
Disclosure of Material Connection: My recommendations above are “affiliate links.” This means if you click on the link and purchase the item, I will receive a commission. Your cost will be the same as if you order directly. I only recommend products or services I use personally and believe will add value to my readers. This disclosure is in accordance with the Federal Trade Commission’s 16 CFR, Part 255: “Guides Concerning the Use of Endorsements and Testimonials in Advertising.”